Spring Training - 1987 - Port Charlotte, Florida.
As a 13 year old kid, I remember running up to Scott Fletcher to get his autograph on a baseball card.  After he signed it, I looked at the bible verse: John 3:16.  This is probably something he had written many times before and has written many times since, but something struck me.  I KNEW that bible verse.  It wasn't just words, it had meaning.  I had memorized it at church and here was someone who had nothing to do with my church, but made a connection! 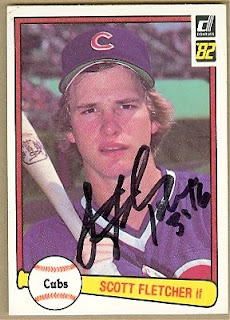 "For God so loved the world that he gave his only begotten son.  Therefore, whoever shall believe in him shall everlasting and eternal life". John 3:16

As I looked around at other autographs, I realized there were other players who used the same verse.  Greg Gagne, an important member of the 1987 World Champion Twins also put the verse on his card. 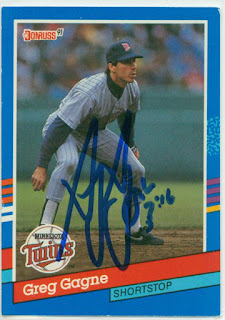 Tim Foli, yet another shortstop, added his Romans 8:28 bible verse. "And we know that in all things God works for the good of those who love him, who have benn called according to his purpose."  Romans 8:28 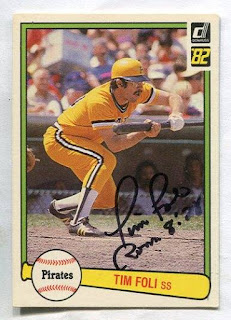 Defensively, a baseball team needs to be strong up the middle.  Maybe the same thing can be said for a Christian.  I doubt anyone has been hurt by a baseball player writing a bible verse on their baseball card, but I am sure some have been helped by it!
Posted by Unknown at 7:20 PM